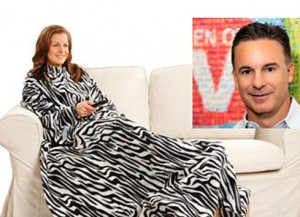 A recent Yahoo Finance article discussed “surprisingly simply ideas” that have both resonated with a broad range of consumers and became products which generated huge sales. Included among the list is the popular As Seen on TV product, the Snuggie. The Snuggie, created by Allstar Products Group, appears like a simple idea that could have been created years ago. “It’s definitely one of those ideas that’s so simple that a lot of people might say to themselves, ‘Why didn’t I think of that?’” says Scott Boilen, founding member and president and CEO of Allstar Products Group.

“It had actually been around in various forms for a few years with similar products available in the backs of catalogs, but nobody really knew about them,” Scott Boilen continues, so Allstar decided to create and market their own version. The rest is As Seen on TV history and soon we all saw the Snuggie go viral!

Scott Boilen says sales have remained consistent after the first-year spike and he believes the broad-reaching appeal of the Snuggie is a key element to its success. “I think what clicked for consumers is that the Snuggie appealed to everyone….Doesn’t matter if you’re a kid, a senior citizen, a mom, a guy — everyone can wear one. The market potential was limitless.”

Learn more about the Snuggie