There’s something a bit familiar about the recent Perfect Bacon Bowl commercial, a certain through-back sound reminiscent of a well-known rock band. According to Des Bieler (of the Washington Post) a lot of people took notice and he found the Bacon Bowl ad “amazing!”

“Many folks were just minding their own business on Saturday, trying to watch some college football,” begins Beiler “when this ad interrupted their lives. And not in a bad way at all.” The ad was a new Perfect Bacon Bowl commercial (see below) and the ears of many viewers perked up at the sound.

“It sounds for all the world like mid-70s Queen, complete with Freddie Mercury. I mean, that is uncanny,” Beiler declares. The creator of the jingle, Rick Altizer, actually asked a frontman for a Queen cover band, Queen Extravaganza, to sing the Perfect Bacon Bowl jingle. It’s an “homage to an iconic band” Beiler says.

The ad caused a lot of social media buzz. Many people declared their appreciation of the commercial, and the Perfect Bacon Bowl! 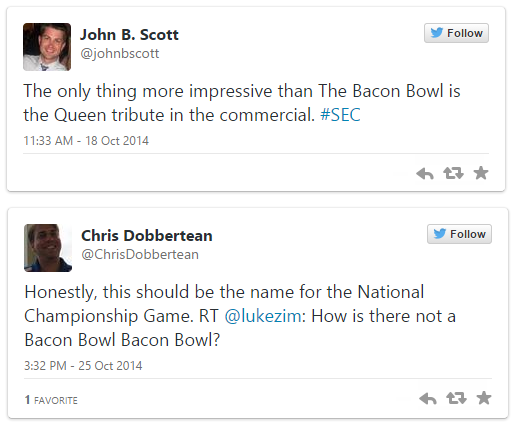 Allstar Products Group CEO, Scott Boilen, shares their enthusiasm. “Perfect Bacon Bowl is a textbook case of the right product coming along at just the right time,” Scott Boilen says in a recent Bacon Bowl press release. “What’s so terrific is the feedback we get from people who buy, and consistently tell us how it surpassed their expectations for performance and ease of use.”